This story is based on fact, but the names of the people involved have been changed to respect their privacy. The story demonstrates a true account with real events, told as truthfully as replication and effect allows.

Claire was born in 2005 – a true millennial! By the time she turned 10, she was familiar with the internet, mobile devices, and social media. She is a very pretty, petite girl, with large brown eyes and long, dark hair. She is happiest in her bedroom, with her smart phone and her photo apps!

I am Claire’s mother, and I am guilty of my precious daughter’s obsession with selfies! Now, that is not surprising, especially because I have been photographing her since she was born! I have thousands of photos of Claire on my phone. She is an only child, and I love her to bits!

Initially, I thought it was cute that she had some social media followers. I have always wanted her to be popular amongst her peers. It even became a competition amongst her friends’ mothers and me. We were all a little obsessed with what we thought of as our daughters’ popularity.

When Claire was 12, she noticed some white patches on her eyelids. It started with small white patches that grew together to form one larger patch – on both eyes. The right side was a little bigger than the left side, with the lids almost completely white. She also had a small patch on the side of her mouth, and another large patch inside her bottom lip.

Clair’s skin has always been sensitive, so we thought the patches would go away over time. On the Fitzpatrick Scale, her skin is between Type 3 and 4, so the patches are noticeable. Claire grew her fringe so that the eyelids were covered, but she struggled in hot weather. After a year of hiding the spots, Claire visited a dermatologist and was diagnosed with Vitiligo.

Vitiligo is an acquired loss of pigment with patches of full depigmentation. The skin loses its natural pigment, resulting in light patches that can appear anywhere on the body. They appear most commonly on sun-exposed areas such as the face, upper chest, backs of the hands, arms, and feet. People are not born with this depigmentation, but the patches of color loss develop later and usually manifest before age 20.

The dermatologist prescribed a topical ointment to treat her eyes. Claire was told that the approach would be to focus on the eyes first, before starting on the corner of the mouth. After that, the treatment would begin on the inside of her lip, which is a very difficult area to treat because it is always moist and the saliva easily washes the active ingredients away quickly of most treatment ointments.

After 3 months of treatment, there were no visible results, and the patches of Vitiligo on her eyelids were increasing in size. The dermatologist then suggested that UVB treatment would be the next step.

Phototherapy with narrowband ultraviolet B (UVB) has been shown to stop or slow the progression of active Vitiligo. It might be more effective when used with corticosteroids or calcineurin inhibitors. Therapy needs to be done two to three times a week. It could take one to three months before any change is seen, and it could take six months or longer to get the full effect.

I was nervous about the UVB treatment, especially on Claire’s eyelids. It seemed to me to be a bit dangerous and would be difficult to travel to the practitioner 2 to 3 times a week and navigate the social distancing aspect of the COVID-19 protocols. I decided to do some Vitiligo research to find alternative treatment options. I found a company that not only offers various Vitiligo treatments but also offers a free online assessment to ensure that the best solution is found. One of the consultants at Vitiligo Treatment emailed me the completed assessment the next day and I was very impressed by the care and time she had taken to analyze my daughter’s condition. I called the company and spoke to the consultant concerned. We discussed Claire’s Vitiligo at length.

She was meticulous and thorough, ensuring that she recorded the true extent of Claire’s symptoms. I immediately felt secure in the knowledge that Vitiligo Treatment and its team of experts would help us. I felt confident that this global company was the best choice for Claire. Reading the various case studies helped me to understand that Claire was not alone, and that help was just an order away.

It is important to start treatment as soon as possible because the sooner Vitiligo is treated, the better the results will be. People who have had Vitiligo for a long time, have struggled to treat their symptoms and have had to use a multi-pronged approach.

The consultant suggested the Vitilox® Vitiligo Rapid Eye Treatment for the eyelids. This product has been formulated for the treatment of sensitive skin areas around the eyes. Clinical studies with this product have produced excellent re-pigmentation results on areas around the eyes, mouth, and stubborn spots on other parts of the body. The application is twice daily onto freshly cleansed skin, using very small amounts. We used this for the eyes and the spot next to Claire’s mouth.

We were advised to use Vitiligo Vitilox® Lip Balm for Claire’s inner lip area & Vitilox® T-Cell-V Immune Therapy capsules. The lip balm is specially formulated for the treatment of Vitiligo, and contains stimulating elements which are absorbed deep down, triggering the melanocytes into releasing the natural melanin skin pigment. This product combines the healing properties of the Vitilox® Pigmentation Cream into a pleasant-tasting, easy-to-use lip balm that will re-pigment the lips. The waxy lip balm will ensure the active ingredients are absorbed and have time to work below the skin’s surface. There are no known side effects when using the Vitilox® Lip Balm as instructed, as it is made from natural ingredients and is safe for all ages.

The Vitilox® T-Cell-V Immune Therapy capsules contain a special formula with vital ingredients that help melanin (pigmentation) production. The capsules repair the skin cells, activate new pigmentation, and reverse the Vitiligo symptoms. The active ingredients have been carefully selected to work together to regulate the immune responses in Vitiligo patients. They also stop the further spread of Vitiligo and can induce pigment into the inner mouth area. The inner mouth is difficult to treat because it is always somewhat moist. We used a thin piece of surgical tape on either side of her lower lip to keep it open after the lip balm had been applied, and Claire sat with her lip exposed and watched some television for a few hours at night. At least that helped a lot to keep the area dry.

During these months of treatment, Claire stayed off her social media sites. I learned a good lesson during that time about the development of the social comparison theory. The comments that peers and friends provide for each other on social media sites allows for the reinforcement of unrealistic beauty standards. I decided to limit the time Claire used these sites in the future. I believe they increase the rate of anxiety and depression in teenagers.

The only photos taken were ones we sent to Vitiligo Treatment. The consultants were supportive and considerate throughout the treatment process.

Taking photos not only documents the Vitiligo treatment but also helps to alleviate stress. Keeping calm can help with Vitiligo treatment. There is a researched theory that taking a photo of something serves as a trigger for people to forget it. Once people realised, they could rely on the photograph rather than their memory, they no longer needed to mentally save the information for later.

I kept a strict record of the treatments:

Claire was ecstatic over the results, especially on the eyes and corner of her mouth.

At present, Claire uses the lip balm only and is taking the Vitilox® Pigmentation Management Formula (PMF), which was formulated for those who have regained their pigmentation after treatment and are in a maintenance strategy. The PMF is used to ensure that the Vitiligo patches don’t appear elsewhere on the body. The PMF is also used for those individuals who have a family history of Vitiligo even if they do not yet have the condition.

Claire now has a 50% inner lip pigmentation coverage. The eyes and mouth are 100% re-pigmented and there are no further signs of de-pigmentation.

Claire’s Vitiligo treatment started at the beginning of February and ended in June. It was 5 months in total. She will continue with the PMF maintenance and will still use the lip balm. We are both very happy with the outcome! 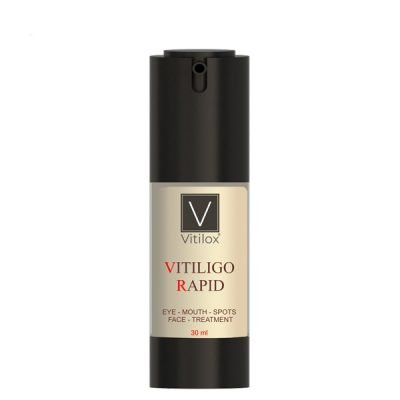 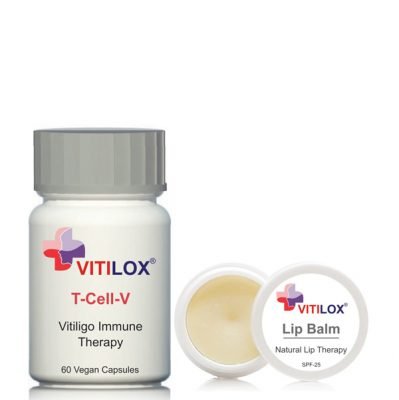