Notice: Trying to access array offset on value of type null in /home/customer/www/vitiligotreatments.com/public_html/wp-content/themes/ultimate-showcase-premium/inc/part-title_area.php on line 10 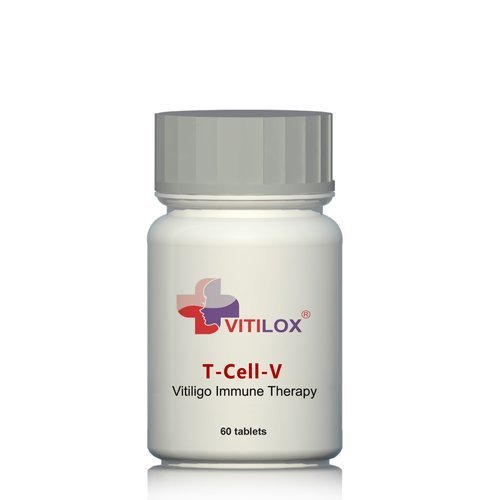 Vitiligo Treatment Cream by Vitilox® has been developed for effective re-pigmentation of your skin.

Your Melanocyte is the pigment producing cell that is damaged and destroyed by the Vitiligo Condition. These are the skin cells that produce Melanin. Melanin is the pigment that gives your skin its characteristic colour.

Our Vitiligo treatment cream contains stimulating element which are absorbed deep down triggering these cells to re-activate.

Vitilox® T-Cell-V has been specifically developed as an effective Immune System Therapy that has been carefully formulated with vital ingredients to assist in regulating melanin (Pigmentation) production, essential to activating new pigmentation to counteract the Vitiligo Condition.

In addition, Vitiligo is an inflammatory disease and these elements have excellent anti-inflammatory properties.

It is recommended that the Vitilox T-Cell-V be used in conjunction with Vitilox Pigmentation Cream when treatment initially begins.

The ingredients of Vitilox T-Cell-V have all been carefully selected to work together for the process of melanogenesis and to regulate the immune responses, in particular, in relation to the alteration of the T-cell population in Vitiligo patients. The alteration of T-cell population shows decreased T-helper cells in patients with Vitiligo. T-helper cells heal and rejuvenate skin by the production of new cells. T-helper cells are arguably the most important cells in adaptive immunity, as they are required for almost all adaptive immune responses. They also help activate cytotoxic T-cells to kill infected target cells.

It is the imbalance in the oxidant-antioxidant system rather than oxidative stress that plays a role in Vitiligo. Detection of various autoantibodies including anti-thyroid and anti-melanocyte antibodies have been found in the serum of vitiligo patients.

Metallic Elements play an important role in the process of melanogenesis. The process of melanogenesis causes normal and malignant melanocytes to produce melanin, which is the pigment found in the skin, eyes, hair, nasal cavity and inner ear. Therefore, this is a vital ingredient in assisting to regulate melanin production, essential to activate new pigmentation to counteract the Vitiligo Condition. In addition, Vitiligo is an inflammatory disease and these elements have excellent anti-inflammatory effects.

Vitamin B12, B1, B3, B6,  which reduces stress and anxiety levels. They help prevent infections as well as support and promote cell health.

Biotin is an important supplement for the heathy functioning of the skin.

Selenium plays an important role in the health of the immune system. This antioxidant lowers oxidative stress in the body, which in turn reduces inflammation and enhances immunity.

HOW TO APPLY VITILOX PIGMENTATION CREAM

Vitilox Vitiligo Pigmentation Cream is best applied to the affected areas of your body once or twice a day, after bathing.

After taking a bath or shower, make sure the areas that you are going to apply the cream to are clean and dry.

Apply a small amount of the Pigmentation Cream to the Vitiligo affected areas only. Rub the cream lightly, and allow it to penetrate into the inner layer of the skin.

The Vitilox Cream absorbs and penetrates quickly into the skin, and remains active for up to 24 hours after application.

Once the Vitilox Vitiligo Pigmentation Cream has been applied, you are able to use your normal make up or cover cream on the treated areas.

One tablet taken daily, after breakfast.